AS FLYING, CAMERA-WIELDING machines get ever cheaper and more ubiquitous, inventors of anti-drone technologies are marketing every possible idea for protection from hovering eyes in the sky: Drone-spotting radar. Drone-snagging shotgun shells. Anti-drone lasers, falcons, even drone-downing drones. Now one group of Israeli researchers has developed a new technique for that drone-control arsenal—one that can not only detect that a drone is nearby, but determine with surprising precision if it’s spying on you, your home, or your high-security facility.

Researchers at Ben Gurion University in Beer Sheva, Israel have built a proof-of-concept system for counter-surveillance against spy drones that demonstrates a clever, if not exactly simple, way to determine whether a certain person or object is under aerial surveillance. They first generate a recognizable pattern on whatever subject—a window, say—someone might want to guard from potential surveillance. Then they remotely intercept a drone’s radio signals to look for that pattern in the streaming video the drone sends back to its operator. If they spot it, they can determine that the drone is looking at their subject.

In other words, they can see what the drone sees, pulling out their recognizable pattern from the radio signal, even without breaking the drone’s encrypted video.

“This is the first method to tell what is being captured in a drone’s [first-person-view] channel” despite that encryption, says Ben Nassi, one of the Ben Gurion researchers who wrote a paper on the technique, along with a group that includes legendary cryptographer and co-inventor of the RSA encryption algorithm Adi Shamir. “You can observe without any doubt that someone is watching. If you can control the stimulus and intercept the traffic as well, you can fully understand whether a specific object is being streamed.”

The researchers’ technique takes advantage of an efficiency feature streaming video has used for years, known as “delta frames.” Instead of encoding video as a series of raw images, it’s compressed into a series of changes from the previous image in the video. That means when a streaming video shows a still object, it transmits fewer bytes of data than when it shows one that moves or changes color.

That compression feature can reveal key information about the content of the video to someone who’s intercepting the streaming data, security researchers have shown in recent research, even when the data is encrypted. Researchers at West Point, Cornell Tech, and Tel Aviv University, for instance, used that feature as part of a technique to figure out what movie someone was watching on Netflix, despite Netflix’s use of HTTPS encryption.

The encrypted video streamed by a drone back to its operator is vulnerable to the same kind of analysis, the Ben Gurion researchers say. In their tests, they used a “smart film” to toggle the opacity of several panes of a house’s windows while a DJI Mavic quadcopter watched it from the sky, changing the panes from opaque to transparent and back again in an on-off pattern. Then they showed that with just a parabolic antenna and a laptop, they could intercept the drone’s radio signals to its operator and find that same pattern in the drone’s encrypted data stream to show that the drone must have been looking at the house. 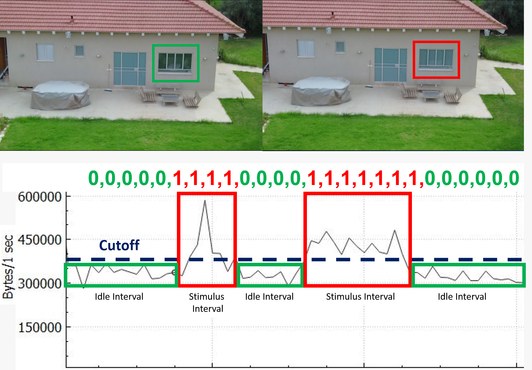 By changing the opacity of a “smart film” material over a target house’s window panes, the researchers could produce a recognizable pattern in the encrypted video communications of a drone watching that house.

In another test, they put blinking LED lights on a test subject’s shirt, and then were able to pull out the binary code for “SOS” from an encrypted video focused on the person, showing that they could even potentially “watermark” a drone’s video feed to prove that it spied on a specific person or building.

‘You can observe without any doubt that someone is watching.’ Ben Nassi, Ben Gurion University

All of that may seem like an elaborate setup to catch a spy drone in the act, when it could far more easily be spotted with a decent pair of binoculars. But Nassi argues that the technique works at ranges where it’s difficult to spot a drone in the sky at all, not to mention determine precisely where its camera is pointed. They tested their method from a range of about 150 feet, but he says with a more expensive antenna, a range of more than a mile is possible. And while radar or other radio techniques can identify a drone’s presence at that range, he says only the Ben Gurion researchers’ trick actually know where it’s looking. “To really understand what’s being captured, you have to use our method,” Nassi says.

Rigging your house—or body—with blinking LEDs or smart film panels would ask a lot of the average drone-wary civilian, notes Peter Singer, an author and fellow at the New America Foundation who focuses on military and security technology. But Singer suggests the technique could benefit high-security facilities trying to hide themselves from flying snoops. “It might have less implications for personal privacy than for corporate or government security,” Singer says.

DJI didn’t respond to WIRED’s request for comment. Nor did Parrot, whose drones Nassi says would also be susceptible to their technique.

If the Ben Gurion researchers’ technique were widely adopted, determined drone spies would no doubt find ways to circumvent the trick. The researchers note themselves that drone-piloting spies could potentially defeat their technique by, for instance, using two cameras: one for navigation with first-person streaming, and one for surveillance that stores its video locally. But Nassi argues that countermeasure, or others that “pad” video stream data to better disguise it, would come at a cost of real-time visibility or resolution for the drone operator.

The spy-versus spy game of aerial drone surveillance is no doubt just getting started. But for the moment, at least, the Israeli researchers’ work could give spying targets an unexpected new way to watch the watchers—through their own airborne eyes.